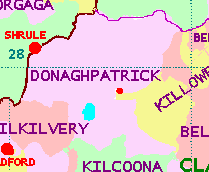 The Donaghpatrick entry in Lewis Topographical Dictionary of 1837

A parish, in the barony of CLARE, county of GALWAY, and province of CONNAUGHT, 2 3/4 miles (E. by N.) from Headford; containing 3697 inhabitants. This parish is situated on the Black river, near Lough Corrib, and comprises 7719 statute acres, as applotted under the titbe act.

It is a rectory and vicarage, in the diocese of Tuam, and is part of the union of Headford, or Kilkilvery.

In the R. C. divisions it forms part of the union or district of Kilcooney and Donoughpatrick, which is also called Ballycolgan and contains a chapel. There are three pay schools, in which are 180 children.