Townlands and Placenames of Shrule

A Profile of Shrule from the year 2000

A magazine published by Galway Diocese in the 1960’s , carried historical articles by J.B. McHugh .  Download  The Mantle articles here. 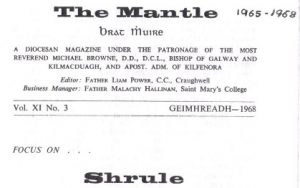 The same President and the Earl of Clanrickard (Rickard, son of Ulick-na-gCeann, son of Rickard, son of Ulick of Cnoc-Tuagh) laid siege to Sruthair in the summer of this year 21st June. On this expedition, along with the President, were most of the chieftains and mighty champions of valour and prowess of Upper Connaught, from Magh-Aoi to Echtge, and from Galway to Athlone.

There were also in the President’s camp a great number of captains, with their soldiers along with them, and two or three battalions of Irish hireling soldiers. There were in it also Calvagh, the son of Turlough, son of John Carragh, son of Mac Donnell, and his two sons, with their forces; also a party of the descendants of Donnell, the son of John, son of Owen-na-Lathaighe Mac Sweeny, namely, Hugh, the son of Owen, son of Donnell Oge, and Donnell, the son of Murrough, son of Rory More, with five chosen battalions of gallowglasses, and also a battalion of gallowglasses of the Clann-Dowell; the ordnance and forces of Galway. There were also a troop of vigorous cavalry, to the number of three hundred, in armour and coats of mail. When Mac William Burke (John, the son of Oliver, son of John) heard that the President and the Earl had this great army assembled around Sruthair, it grieved his heart and disturbed his mind; and he called forthwith to his assistance the Lower Burkes and the descendants of Meyler Burke, also the Clann-Donnell Galloglagh, and Murrough of the Battle-axes, the son of Teige, son of Murrough, son of Rory O’Flaherty.

These came, attended by as many as they had been able to procure of Scots and Irish, hired soldiers and youths; and they never halted until they reached a hill which was nigh to the camp of the President and the Earl; and here they held consultation, to consider in what way they could disperse or scatter those choice and irresistible forces, who had invaded them for their territory and patrimony. They resolved first to convert their cavalry into infantry, and having done so they formed into order and array; and they promised one another that they would not disperse or depart from that order, whether they should route the enemy or be routed by them. They all resolved that if the son or kinsman of one of them should be slain in his the survivor’s presence, they would not stop with him but pass over him at once, as though they were enemies and strangers. In such state they advanced towards the other army. As for the President and the Earl, they placed their ordnance, their soldiers gunners, their halberdiers, and their men in armour on foot, in the perilous narrow defiles through which they supposed that the other party would advance upon them, and placed by their side the Clann-Sweeny, the Clann-Donnell, the Clann-Dowell, and all the other infantry of their army; while they themselves, and the body of vigorous cavalry they had with them, stood on one side in reserve, to support the fight at the proper time.

It was grappling with difficulty, and facing impossibility, for the youths of West and Lower Connaught to attack this well-defended position; nevertheless, they marched onward, but they had not advanced far before their sides were pierced, and their bodies wounded, by the first volley of fiery shot discharged at them from the guns, and of arrows from the beautiful elastic bows. It was not, however, terror or fear, cowardliness or dastardliness, that these wounding volleys produced in them, but a magnanimous determination to advance directly forward; so that they tried the force of their lances, the temper of their swords, and the heaviness of their battle-axes, on the skulls and crests of their antagonists. Their opponents did not long withstand these vigorous onslaughts, before a numerous body of them gave way, and retreated precipitately; upon which the powerful party who came up took their places and position, and then proceeded to exterminate those who stood before them, and, following up the route, they pressed closely and vehemently after the flying troops for the distance of two miles from the camp, during which pursuit they cut down and lacerated great numbers. When the people of Mac William Burke, in following up the pursuit, had passed by the cavalry, they were attacked in the rear by that numerous body which had been kept on one side in reserve, and numbers of their troops were slain by them ; and a greater number would have been cut off, but for the closeness and firmness of the battle-array and order which they had formed that morning. They afterwards returned home in triumph, after having defeated their enemies. They had, however, committed one great mistake: when they had cleared the field of battle, by putting their enemies to flight, not to have remained that night in the camp; for, had they done so, there could not have been any dispute as to their having the name and renown of having gained the victory.

As for the President and the Earl of Clanrickard, they and the descendants of Donnell Mac Sweeny (who had not fled from their enemies on that day), with a party of their soldiers, remained in the camp that night. They afterwards stopped to search for and inter their slain relatives and friends, and to relieve the wounded throughout the field of slaughter. Little Patrick Cusack was slain in this battle on the side of the English, and his death was generally lamented and also Calvagh, the son of Turlough, son of John Carragh, and many others not enumerated. On the side of the Irish were slain Walter, the son of John, son of Meyler Burke, who was called Cluas le-doininn, and Randal, the son of Mac Donnell Galloglagh; also the two sons of John Ereanagh, two constables of the Clann-Donnell of Scotland. There were also left slain here countless numbers of Irish and Scots of the Clann-Donnell, the Clann-Sweeny, and of the adherents of the Burkes.

The Lower northern army, who had routed such of the forces as had given way, but who had not maintained the field, believed that in this rencounter the victory was theirs; while those lords who remained during the night in the camp considered that they alone were entitled to the fame of that victory.

From the Annals of the Four Masters