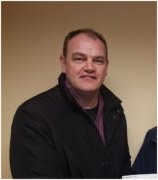 A native of Ballinrobe and one of three brothers in the priesthood.

A MAN FOR ALL SEASONS, SITUATIONS & OCCASSIONS

It‟s been more than 19 years ago since Fr. Crosby took to the Curraghline and leaving Galway city behind him after a lifetime of work there to take up his new appointment as PP of Shrule Parish……….. see the tribute

A widely read and scholarly man. Shrule Community Hall was built during his tenure. 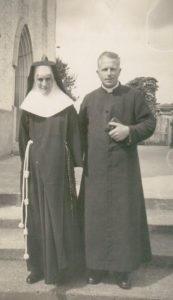 A native of Caherlistrane, he was appointed Parish Priest and remained in that position until he retired on June 30th, 1981.

He was a dedicated and caring pastor and he became famous for his work in maintaining the schools and churches in the parish.

He also organised football tournaments, concerts and local carnivals. He is buried in the Shrule church grounds.

An active administrator, he extended and enlarged both churches. Glencorrib was extended in 1944, considerably increasing its capacity. He also enlarged Shrule parochial house. A friend of Pádraig Pearse and Liam Mellows, he spent some time in America and wrote a lot of his correspondence in Irish.

Appointed manager of Glencorrib school in 1917, after the position was returned to the parish. Not much is known about Fr. Lydon other than he moved to Lisdoonvarna, where he is buried.

A native of Ballyhaunis, he was ordained in 1877. He built a parochial house at the back of the church, on the site of the present house. He also had a great interest in farming and passed a lot of time with farmers, discussing their problems. He died on May 27, 1917 at the home of his sister in Claremorris,where he was buried.

The curate in 1905 was Fr. Martin Kelly for 3 years and then for 8 years no curate was appointed until 1916 when Fr Considine took up the position.

Natives of Oranmore, Father John succeeded Fr. Geraghty as P.P. of Shrule parish in 1867. He was responsible for the decision of building a church in Glencorrib and he also undertook the repair of the church in Shrule. Like other P.P.s before him he had no curate to help him and had to say mass in both Kilroe and Shrule every Sunday. He died on the March 3, 1885 at the age of fifty four.He was replaced by his brother Fr. Daniel, previously P.P. of St.Nicholas West. He stayed six years in Shrule and those were relatively uneventful.

Brother of father James he was a native of Moylough, he was appointed to Shrule in 1864 to replace Fr. Phew. He had no curate to help him in his work. After 3 years in the parish he was transferred to Oranmore where he died ten years later at the age of seventy-four.

Both born in the townland of Rostaff, near Moyne, they belonged to a wealthy and respected family which gave it’s last three sons as priests to the diocese. Fr. Michael was appointed to replace Fr. James Geraghty as P.P. in 1847. For many years he had to say mass every Sunday both in Shrule and in Kilroe until 1857 when his brother Fr. Andrew was appointed as his curate. In 1864 Fr. Michael retired and Fr. Andrew was transferred as soon as a new P.P. was appointed. Fr. Michael died in his home place on the 7th March 1866.

A native of Headford, born about 1746, he was educated abroad. His parents were buried in Teampall Colmain in Shrule. He is recorded as being parish priest of Shrule in 1800 but it is most likely that he was in that position at a much earlier date. Because of a dispute with the Parish Priest of Kilmaine he was transferred in 1817 to be P.P. of Rahoon, he was also promoted Vicar of the Wardenship. In 1832 he was requested to relinquish his position in Rahoon, an arrangement was made to confer to him the parish of Shrule with a contribution of 35 pounds per annum from the parish for his upkeep, provided he would give up Rahoon. From then on Fr. Lowther was nominally the P.P. for Shrule , in fact he lived in Quay st. Galway until his death on Oct. 11, 1839, at the age of ninety-three.

In 1704 a list of popish priests says he was 52 yrs old , living in Moyne . He was ordained in 1675 in Oranmore by Dr James Lynch (titular Archbishop of Tuam)

Fr. John Creaven was born in Caherlea, Tuam in 1917. He received his primary education from the Franciscan Brothers O.S.F. in their Curry Monastery School. Fr. Creaven has never forgotten his native parish of Corofin nor the debt he owes to its community, school, church and all the priests who served there.