Fr. Feeney (4 March 1889 – 15 April 1945), also known as ‘Harry’, was a native of Two-Mile-Ditch in the parish of Castlegar, outside Galway. An obituary in the Connacht Tribune  reveals that he was the son of James Feeney, and attended Castelgar National School and then St. Joseph’s College, Galway.

‘After spending some time in the Irish College in Paris he returned to Ireland and was ordained at Maynooth in 1914’. His first curacy was in Lisdoonvarna, Co. Clare. He was transferred to Clarinbridge in about 1915.

He joined the Clarinbridge Company of Irish Volunteers around August 1915. According to a reference from Eamon Corbett (Vice Officer in Charge of the 1st Western Division IRA) submitted to the Military Pensions Board in 1937, Fr. Feeney assisted him in ‘organising and training various companies’ in Galway. Fr. Feeney was apparently close with Liam Mellows, P.H. Pearse and other general headquarters officers. Shortly before the Rising he met with Pearse in Dublin when they ‘had a long conference’ about the proposed Rising.

Just prior to the Rising Fr. Feeney helped Captain Alfie Monaghan, who was originally from the Belfast and a fluent Irish speaker, escape from Galway city, after he had been served with an order to leave Ireland before 9 April (1916) under the Defence of the Realm Act. Monaghan was involved in enrolling new members and drilling with various Irish Volunteer groups in Galway city. Thomas Newell’s Military History Witness Statement (BMH WS) gives a detailed account of the escape.

Patrick Callanan, in his BMH WS stated that ‘While Mellows was in jail, Fr. Feeney was appointed C.C. Clarinbridge. He created a new spirit in the Volunteers and took an active part in organising the Volunteers all over the country. He received great assistance from Fr. O’Meehan, C.C., Kinvara, Fr. Tom Burke, Diocesan secretary, and Fr. Connolly, Professor, Diocesan College, Ballinasloe.

Fr. Feeney’s own Military Service pension file, which is available online, provides much detail relating to his activities prior to and during Easter Week 1916. The file indicates that during Easter Week 1916 he carried out all ‘orders of General Mellows’, and that he was active at Killeeneen, Clarinbridge, Oranmore, Athenry, Moyode and Limepark.

He indicated that he ‘…assisted in preparations for Rising. In charge of munitions under order of P.H. Pearse.’. He also indicated that he was aware of the plans for the Rising months in advance and had been assisting with ‘getting guns’. He secured 26 revolvers from Dublin and 40 or 50 sporting guns. 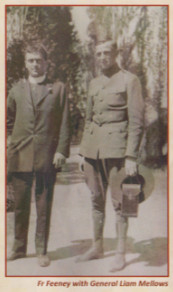 When the Volunteers mobilised in Clarinbridge on Easter Sunday, though he did not fire any shots on the Barracks there, he was with the men all the time, acting as both an Officer and a Chaplain. On Wednesday he went to see his Bishop, and recalled that ‘I was not received very well but I got the necessary permission to hear confessions. The police chased me back from Athenry to the Agricultural Farm…’. Later that evening Fr. Feeney together with the Volunteers left the Farm and spent the next few days at Moyode Castle. They travelled to Limepark on Friday (28th April). The decision to disband was made while there.

Mellows and the Volunteers had been receiving ‘thousands of conflicting rumours’ about the surrender in Dublin and also about the lack of Volunteer activity around the country. So the decision to disperse was made, though very reluctantly on Mellows part. Eamon Corbett further indicated that Fr. Feeney’s presence ‘did much to keep up the morale of the men through the week’.

After the Volunteers disbanded Fr. Feeney tried to return to his parish but was unable to get through the military cordon. He then went on the run until the mid-June, at which point an agreement between the Ecclesiastical authorities of the Galway Diocese and the British Military permitted him to return to his parish. However, he became ill in about August and left for America to recuperate in California, and spent five years with a mission there. On his return to Ireland he was appointed curate in Oranmore, and also spent some time as curate in Gort before he was appointed Parish Priest for the parish of Shrule, Co. Mayo, in 1931.

While in Shrule he extended and almost completely rebuilt St. Joseph’s Church. In 1944 he extended and renovated the church at Glencorrib. He was also instrumental in providing a new school in Shrule and a Parish Hall.

Fr. Feeney died on 15th April 1945 at Seamount Nursing Home, Galway. At the time of death he possessed £801,14.2. In his will, dated 19th March 1945, he requested that £25 be left for ‘masses for myself and my intentions’, £25 to his housekeeper Miss Donnellan, with the remainder to be divided between two family relatives, Martin Feeney and Michael Fallon, both of Two-Mile-Ditch.

He was buried in the grounds of Shure Church following a large funeral, attended by over fifty priests and a large body of the people of the parish.

In praise of Fr. Feeney

“He represented the true figure of the Irish priest –

a man entirely devoted to the spiritual and temporal

welfare of his people, a man whose heart throbbed with

sympathy for his people, a man with a high sense of 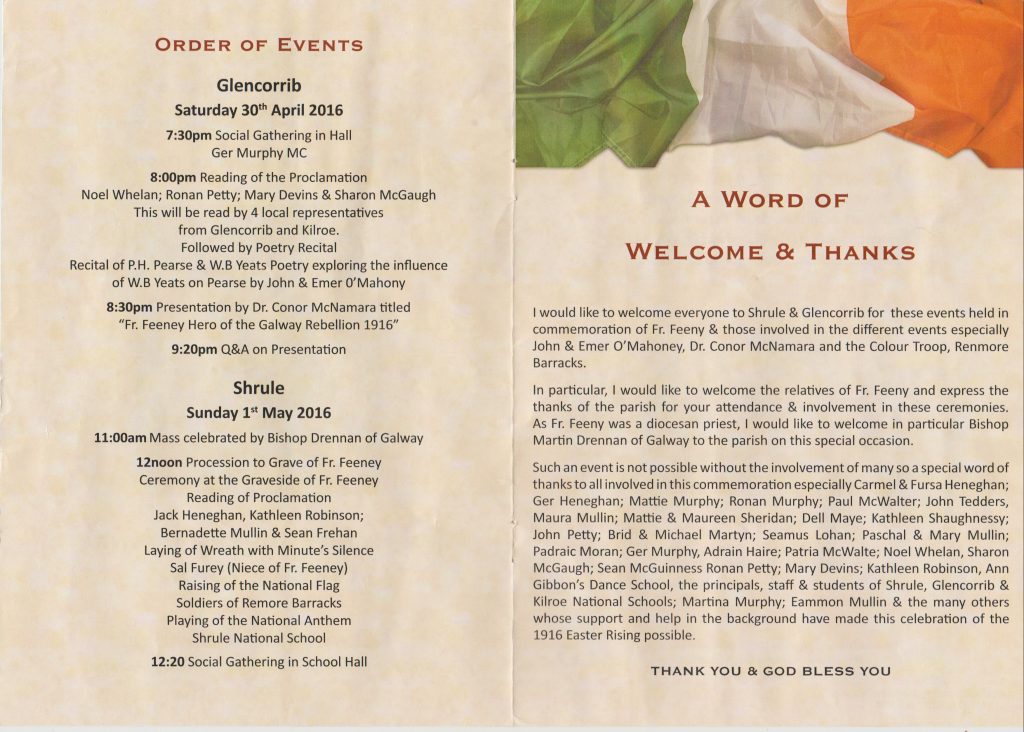 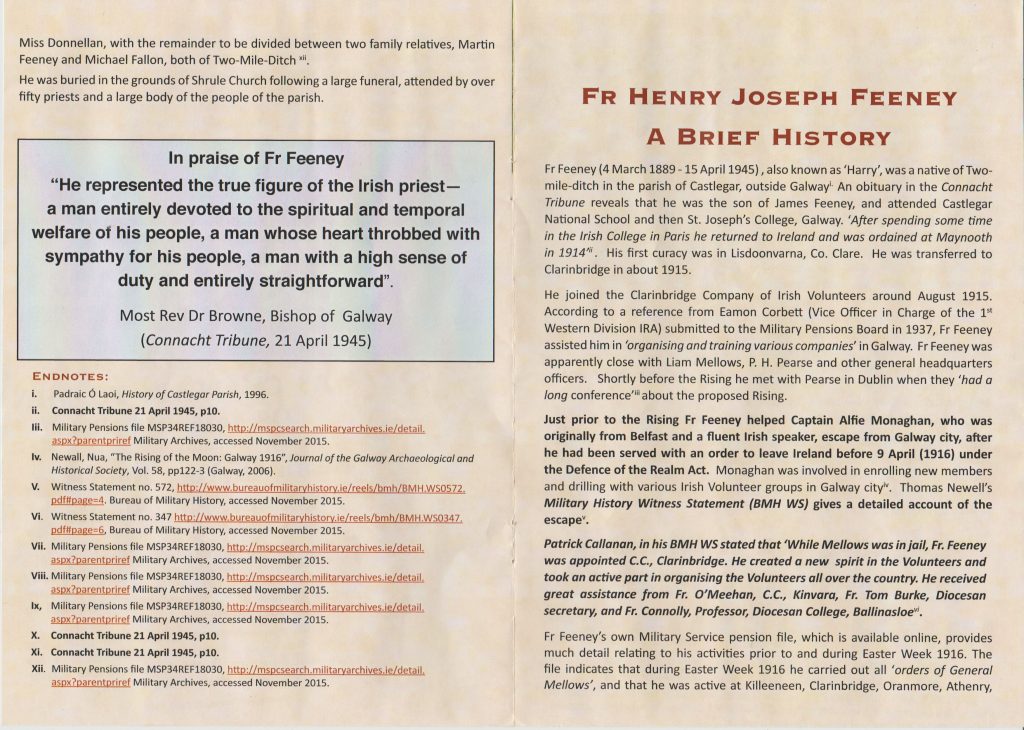 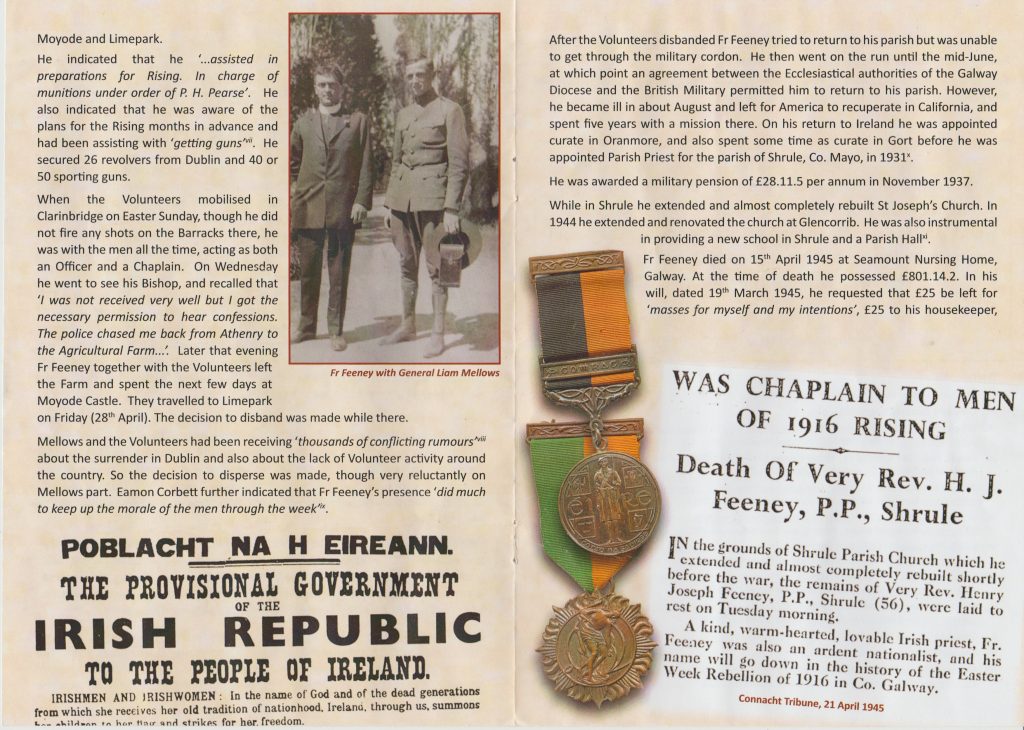