The Sculpture and Installation of Noah’s Ark

Church of the Immaculate Conception, Glencorrib

The Old Testament story of Noah and the Ark is a fascinating one for within its ancient text and imagery are many parallel truths with the lives of people in this 21st century.

The word “Ark” comes from the Hebrew meaning for “box” or “chest” and is presented to us in the story as a symbol of safety and salvation, even the sound of the word “Ark” echoes a place of quiet security and meditation. 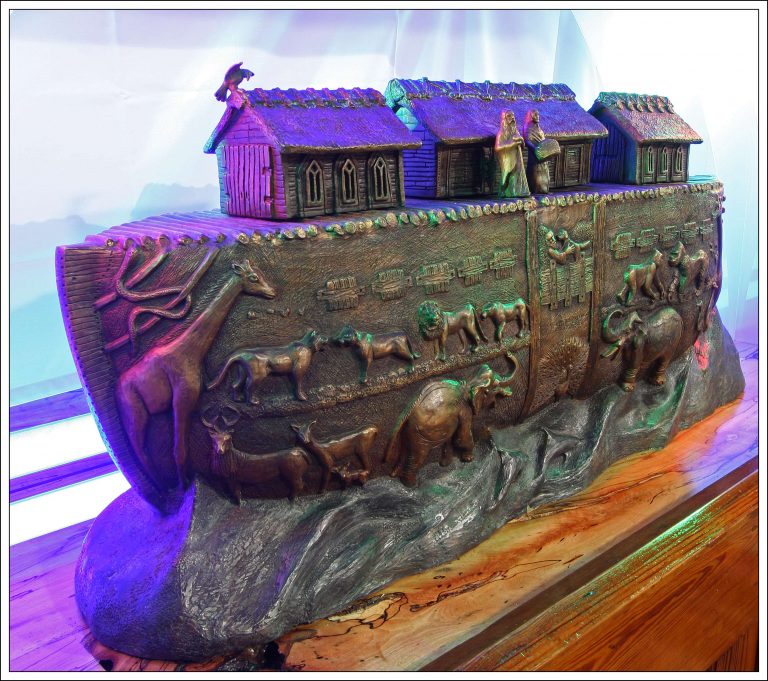 The sculpture and installation in our church catch the moment in the story when the Dove returns to the Ark with a tiny olive branch in its beak, signalling that the Great Flood waters were receding, land was re-emerging and soon all the animals would be free again to roam the earth. 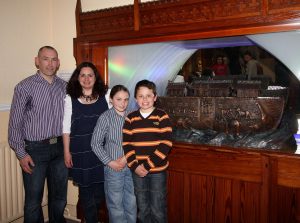 Noah and his Wife are up on deck and have not yet noticed the Dove’s arrival on the thatched roof gable of one of the chapels. Instead, they are watching a beautiful rainbow filling the sky above them.

As an artist I am imagining what life aboard the Ark must have been like for the many months it spent at sea, waiting for sight of land, as a sculptor I tried to realise these thoughts and images.

Like many with a background of growing up and helping out on a farm, watching my mother and father working hard every day gave me an understanding and appreciation of how busy day-to-day living must have been on the Ark.

With the building of the Ark watertight and successfully completed inside by Noah and his sons, Shem, Ham and Japheth and having all the animals safely on board, filling up its length and its three storey height, it was now the work of the women to ensure the menagerie of animals were cared for, fed, kept clean, healthy and alive, various food stocks secured and managed, fresh water rationed out and many other duties carried out. Noah’s Wife must surely also have had to maintain some peace amongst the humans in this temporary home for it had to have been at times, a very crowded noisy capsule of life, especially as the days turned to months. 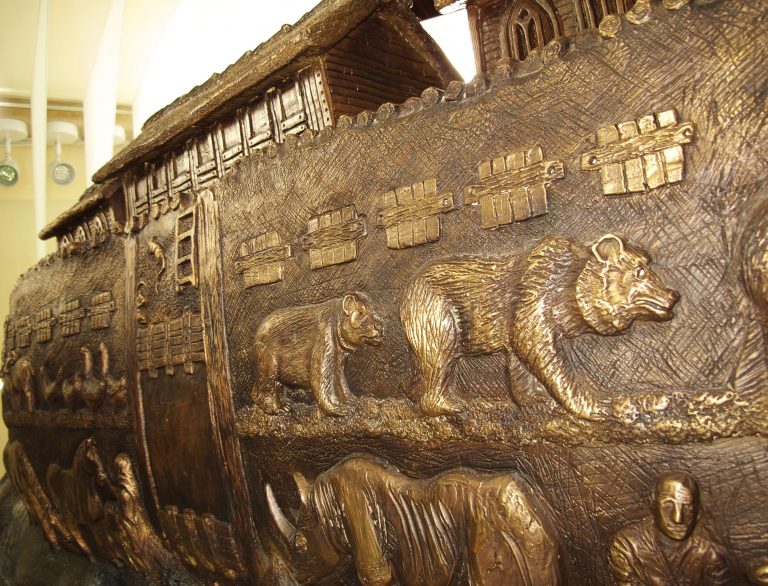 The Sculpture…
Therefore, with these ideas the sculpture of Noah’s Ark was first modelled in the studio using stoneware clay for the structure and a softer clay for the surface details, the animals, figures and water. The three buildings on top represent chapels and were inspired by the forms presented in the church here in Glencorrib.  They are thatched in the traditional Irish way. The sculpture was then transported to the foundry where a mould of the original was made. This was then filled with wax. Metal was heated to its liquid state and poured into the mould, melting the wax in the process. When the metal cooled, the mould was cracked open to reveal the Ark. Chemicals were applied to give tone and colour to the Ark, the sea and the thatched chapels in a process called patination. 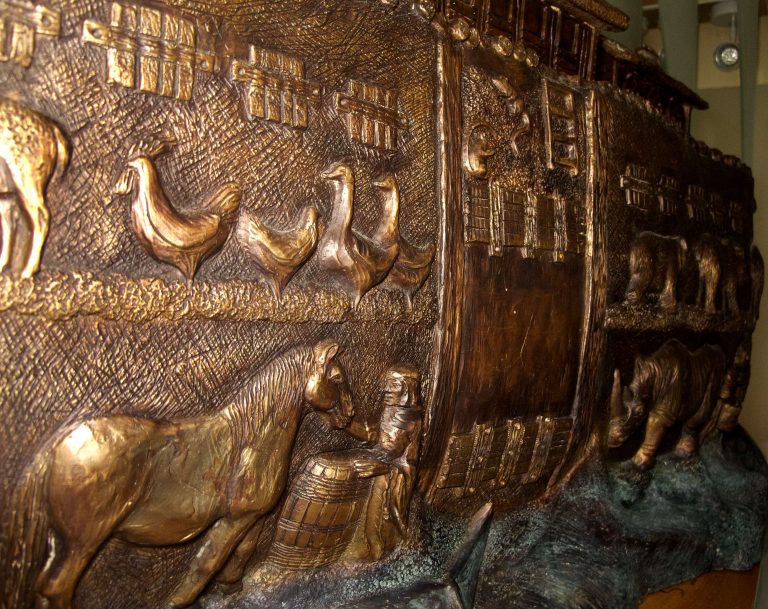 The Installation…
Before the sculpture could be put in its final place in the church, the space also had to be carefully thought out, discussed, and designed, measured and drawn up. Beneath the sculpture is a beautifully crafted slice of spalted beech with its knots, markings, and black fluid lines exposed to mimic the natural movement of a delta. At the back of the installation is a tilted antique-effect mirror lit from beneath by blue lighting to create the illusion of atmosphere and space, sea, cloud and sky. 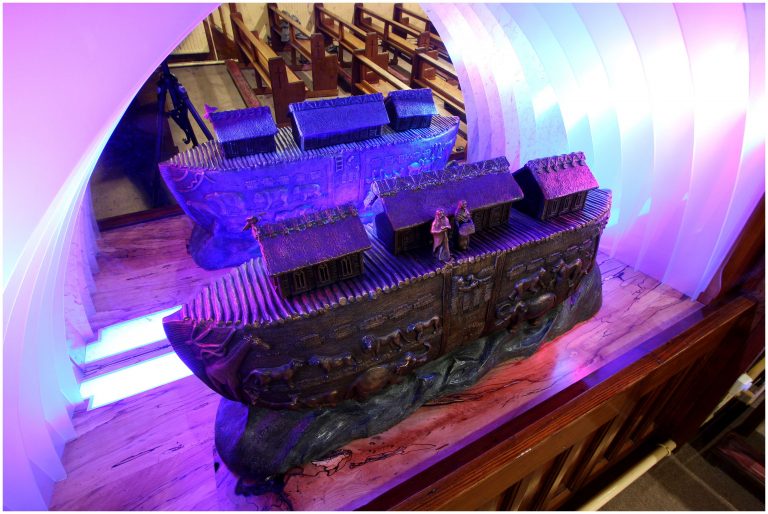 Surrounding the sculpture on either side are opaque glass ‘fins’ cut to resemble a rainbow shape and illuminated on both sides by a specially designed installation of continuously changing coloured light. A wonderful spacial effect has been created here recalling the repetitive wooden ribs found in the craft of boat building and echoed in the repetitive beams and arches in the church’s interior.

What became of Noah and the Original Ark? 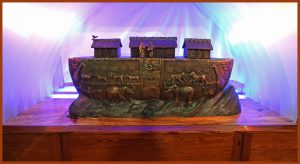 Noah’s Ark eventually came to rest on a mountain peak known as Mt. Ararat in the Middle East; the Persian people call it Kuhn-i-Nuh (Noah’s Mountain) to the present day. There was actually a Great Flood recorded with reasonable certainty about thirty five centuries before Christ (c.3500 B.C.) drowning a massive belt of land measuring an area approximately four-hundred by one hundred miles in ancient Mesopotamia. Scientists and archaeologists excavating the buried ruins of the ancient city of Ur (where Abraham lived) have found a great deposit of mud up to eight ft. thick, left behind after the Flood water receded.

Beneath this layer of mud, they have found the remains of the rich and splendid cities, which perished in Noah’s Flood.

“No matter what accomplishments you make, somebody helped you.”